A three-year-old Belgian Malinois from Tennessee saved her family after alerting them of a house fire next door. That was according to the fire department’s press release of Dog Alerts Family Of The Fire Next Door.

Roux ran to the neighbor’s house.

Just before 10:45 p.m. on Saturday, Roux started to bark frantically and unusually at the front door of her owner named Jeff LeCates. When Jeff went out to investigate why his dog was upset, Roux “flew past him” and rushed toward their neighbor’s house.

After following the pup, Jeff realized that his neighbor’s home was on fire. So he started pounding the door, which woke the family up. Because of that, the three family members and their pets escaped the burning house unharmed. Meanwhile, Jeff tried to put out the fire using the garden hose while waiting for the firefighters.

Franklin Fire Marshal Andy King reported that fireworks caused the unfortunate incident that the homeowner tried to dispose of that night. It started around 10:20 p.m., about one hour after the fireworks were thrown out together with the other trash.

According to reports, the fire caused around $50,000 in damages. That is because it burned through the house’s exterior soffit and the attic above the attached garage. Despite this, the family was lucky that no one got injured, thanks to Roux’s help.

However, as it turns out, Roux seemed to be returning a favor. The homeowner of the home was the one who helped in Roux’s adoption. The woman saved the pup’s life by helping her find a family, and now Roux saved her.

The fire department said that the woman works as a dog groomer. Around 15 months ago, she helped facilitate Roux’s adoption after learning that Jeff had lost his German shepherd. Now, these two neighbors owe their lives to each other.

Check out another article by Thenoahsbark: Puppy Living In The Los Angeles River: Found Her Home. 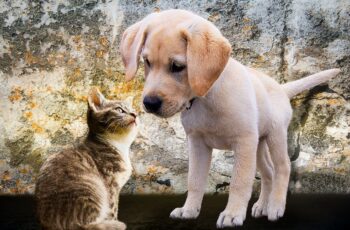