Each dog has their own process of showing just how much they love their owners. Of course, most dogs would wag their tails or give kisses. But there are dogs like this golden retriever named Louboutina who would give the warmest hugs. Golden Retriever Giving Away Free Hugs.

She loves to meet people.

Louboutina loves going on walks with her owner, Cesar Fernandez-Chavez. And when they do that, she has this habit of stopping for the people she meets on the streets. She would also greet them. This is not surprising, though, because Louboutina is a Golden Retriever, and this breed is quite known for being quite friendly.

What makes Louboutina different from the other dogs is that she hugs the people who would also stop and give her pets. Her hug consists of putting her front legs around the person’s legs as a way of embracing them.

Cesar said that he didn’t teach Louboutina this habit of hers. It seems like she has learned this all on her own.

Louboutina started by just holding Cesar’s hand back in 2014. Cesar said that it was around Valentine’s Day, and he was feeling lonely because he had just gone through a break-up, which devastated him. Louboutina must have seen how lonely Cesar was that she decided to hold his hand.

That hand-holding then slowly evolved into hugs. So now, Louboutina does not just hug Cesar, but she also loves giving hugs to the people she meets on the streets. This dog is quite a sweet doggo!

Another article by thenoahsbark? A Dog Named Bowie Saves The Mailman’s Life

Don’t forget to give my sponsors some love too! 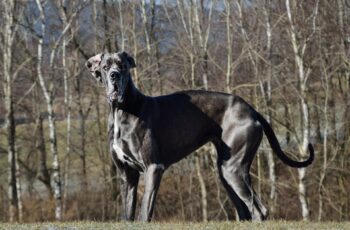