Bambino and Vito love peeking over the wall that serves as a division between their yard and the neighbor’s lot. However, not all dogs are as vertically gifted as the two giant Great Danes.

A handsome chocolate Labrador named Giuseppe moved into the neighborhood where Bambino and Vito lived about half a year ago. Guiseppe’s arrival came as an exciting development for the two gigantic Great Danes, but exchanging proper greetings proved challenging because the wall that separates Giuseppe and the Danes’ houses were too high for the chocolate Lab to see over.

Bambino and Vito’s human mom, Afton Tarin, shared that she has lost count as to how many times Giuseppe tried to jump and get a good whiff of his new doggy neighbors whenever they are all hanging in the yard. Fortunately, Giuseppe’s owners managed to think about how Giuseppe could see his new buds.

Giuseppe’s dad, Robert Carnes, shared that his dog would furiously jump as high as he could to try to say hello to the two Great Danes. Robert suddenly thought that if only Giuseppe had a stepping stool, things would be so much easier for the poor guy.

Luckily, Robert remembered that he does indeed have a step stool at home. Robert recalled that he instructed one of his children to look and grab the footstool inside their house.

Giuseppe’s face lit up as soon as his humans brought out the stepping stool. The Labrador kept wagging his tail in excitement when he realized that he could finally see his doggy neighbors without any problems.

Robert sent Afton a picture of Giuseppe standing on the step stool to greet his favorite doggy neighbor. Afton loved the adorable photo of Giuseppe bumping noses with one of her Great Danes and shared it on her social media account.

Giuseppe and the two Great Danes eventually started going out for walks together in the neighborhood. Afton and Robert are happy that their dogs get along so perfectly. 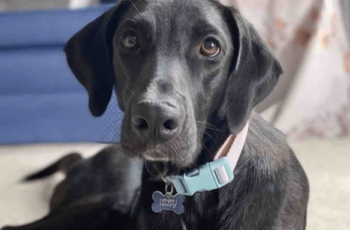 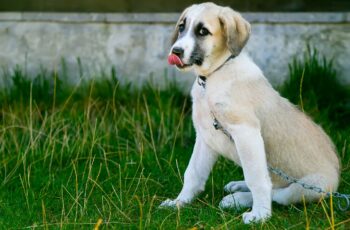